Tonight I debated going to a dark sky spot, well darker than my red zone back yard. I knew humidity was going to be low, as it was all day, clear skies forecasted and I knew it would be a good night. I also thought about doing another meager attempt at AP to capture Saturn. Instead I decided to forgo the nexstar 8 and bring out the trusty XT8. I set up on the porch, grabbed a drum throne and pointed at Saturn. She was very pretty tonight, seeing wasn’t AS good as I expected. There was some turbulence but Cassini division was clearly visible with the 6mm. I could easily see 4 moons. I watched that for awhile, I went back between the 6mm and an Orion “expanse” 6mm with a larger FOV. I have found this series to be a little less sharp and more prone to unwanted light reflections that the other, which name I can’t recall at the moment.

After a while looking at Saturn I decided to go DSO hunting. Nothing specific, tonight was just about enjoying the amazing weather and having fun. I don’t typically plan much anyways. I aimed towards Scorpius and Sagittarius. Several nights ago I was looking at Stellarium and noticed there was a lot in that general area. I had decided to just put on the 40mm eyepiece and scan around. I did that for a moment, I tried to find the table of Scorpius, but that was hiding behind the trees. I caught a quick glance at M4 and wandered away.

Then, since my wife and I went to see Hercules the other night (only a so-so movie), I decided to visit my first DSO love, M13. I plan to write about that, along with another couple of my first outings, but I haven’t gotten to it, and I don’t want to forget about tonight as from this point on I hope to document my outings. Anyways, it was pretty much at zenith at this point, actually it was starting to fall to the east, I bent my neck to see it, then find the star I hop from, then try to rotate my body and the scope to line up with said star, it took a few tries but I finally got it.
The first time I ever saw M13, my Dad and I went to a fairly dark spot about an hour from my house. M13 just struck me. It was just a ball of stars, it was so pretty and it just really grabbed my attention. Tonight, I couldn’t make out each one, but several were easily distinguishable. Tonight was the first time I was able to make out any individual stars from a red sky zone. The nice folks at Cloudy Nights and my local astronomy group were right. Practice and patience really pay off. I normally (from a red zone) just take a look, then move on, because at first glance, it’s just a smudge of faint light. Tonight I spent a lot of time really looking at the objects, and trying to make out details. I was pretty excited to see the detail I did from such a light polluted area.

Using the app Sky Guide on my iPhone I browsed for things to look at. I am still learning what is out there and where it is. I think I looked for something for a moment, and gave up, I can’t even recall what it was. Then, I decided I wanted to try and see Andromeda. I looked it up and followed the arrow the app presented me. Ugh, it was right to the north east area, right over the white zone. It’s totally washed out in that direction. I could almost make out a star now and then. I noticed the double cluster was in the general area, but a little more to the north where it’s a little less washed out. I found Cassiopeia, the two lowest stars, about center, and straight down. I scanned as I went down but I wasn’t sure I was going to line up with the double cluster. So I re-centered and just with the red dot finder, slid down to where I guessed it would be. I peaked through the 40mm eyepiece and…. I’ll be damned! There it is! Beginners luck I suppose!  Even with the light pollution I can clearly make out the brigher stars, and a few tight clusters of dimmer ones. There are quite few colors in this. Tomorrow I plan on being with the Back Bay Astronomer group at a darker sight and really hope to take another look at this. Generally, because of the white out in NE sky, I stay E and SE sky. I was thrilled that I so easily found this and how fun it was to just look at. I tried my light pollution filter. It seems to work TOO well. Many of the dim clusters I was able to see without a filter were completly gone, even after a few minutes of looking. Sure, through the eyepiece the background was black like a dark sky spot, but most of the stars are no longer visible. Back in the case with ya!

Now, I decided to see what else is in the area. I saw the dragonfly cluster on the Stellarium program. I found that with minimal effort as well. I scanned for a bit and saw two bright stars that caught my eye. these were the eyes of said Dragonfly cluster. Now, there are a lot of names for groups of stars, namely the constellations. A short few actually look like their namesake. Reminds me of the episode Bart discovers the comet just after he get’s a constellation lesson from Principal Skinner. 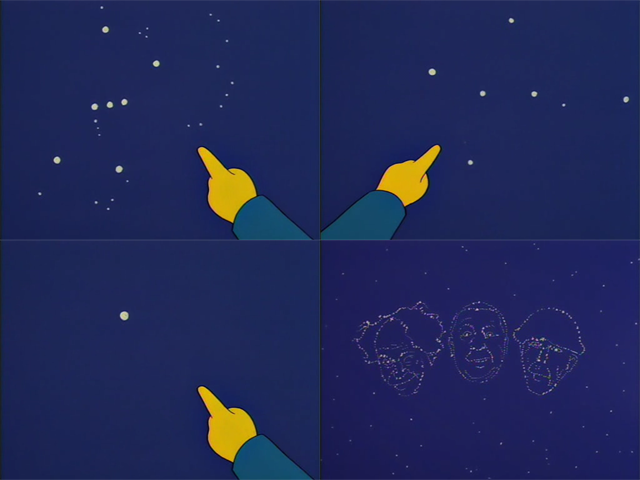 The gag is the single star is called “The Chariot Race” Also the “Three Wise Men” are obviously the 3 stooges.

But this cluster sure does look like a dragonfly! This might be a new favorite. I was able to see quite a few different color stars here too.
I looked for a few other things close by, I can’t even recall what. But I didn’t have much luck.

Again I tried to find Andromeda. No such luck. I think a large part of the problem is my scope is too big! I don’t have a large enough FOV for such a giant object. I am 95% sure I found M32 however. I scanned around for M110 but couldn’t find it. I found a small smudge that I have learned usually represents a galaxy. WIth Stellarium I compared the simulated view of M32 vs M110 and I am pretty sure M32 is what I found based on surrounding stars. I scanned for M110 based on the assumption I was at M32 and vis versa and was unable to find anything else. Again, this area is heavily washed out so the fact I found anything was good enough for me.

I decided it was getting late, and I would scan around back where I started. I stumbled on to a cluster. I had no idea what it was. This isn’t the first time for this. I went to the iPhone and couldn’t find anything there. Weird I thought. I see it in the eyepiece, I look at the red dot and then I looked at the apps to find out what should be there. Nothing is showing up. I thought, “Did I just discover something?!” I knew that was very unlikely. But what was this cluster? I didn’t see anything there on Stellarium. I kept finding other clusters close by on the programs, but not where the red dot was pointing. I kept rechecking the eyepiece. “Did I bump the finder?” I checked it with a close by star and everything lined up. I zoomed way in on the Stellarium and finally found it! M28! I compared the nearby stars and we have a match. I was relieved I was able to figure it out, but man, how cool would it have been to discover a star cluster?!
While I was trying to figure out what it was that I was looking at, I noticed M22 was close by. So I jumped over and looked at that for a few. It was getting late but I was impressed with how much detail I was able to get out of it even with just a few minutes. With both of these I went from 40mm, to 20, to 15mm. M28 was pretty faint and there wasn’t a lot of detail, but M22, even at 15mm had some nice clear distinct stars.

I decided my back was stiff enough and I packed up and went inside.
All in all a fun night, especially for just being in the backyard. It’s nice to know I don’t have to drive an hour away to enjoy my self.
Thanks for reading, keep looking up!